Boa Island close to Belleek strangely enough is joined to the mainland via a bridge at either end with a road running through the middle of it, which makes it more convenient for visiting than either White or Devinish Islands on Lower Lough Erne which are all very rich in Celtic spiritual mythology. Follow the signpost for Caldragh Cemetery for here you will find one of the oldest and most famous carved stones in all of Ireland. Known as the Janus Stone which is over 2000 years old and predates Christianity far back into Celtic times. The double sided figure represents the male and female form with a sunken piece in the middle, perhaps for holding antlers and interlacing thought to represent hair, joining them. Nobody knows for certain what its origin or purpose was but it seems highly unlikely that it had anything to do with the Roman God Janus. A more likely suggestion is that it is a representation of the Goddess Babhbha, a Celtic God of war and fertility after which the island is named. Seamus Heaney, our late great poet visited in 2006 and wrote the following poem about it which of course captures the mood and mysticism better than anyone ever could.... 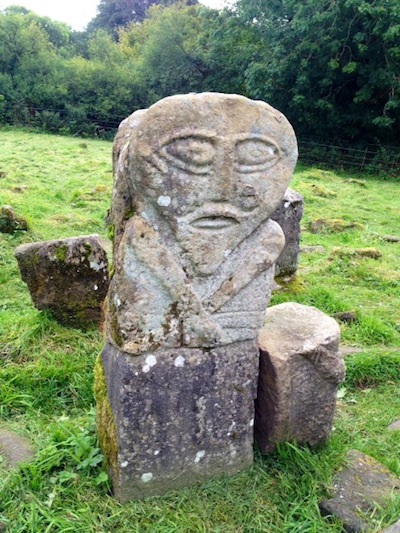 Then I found a two faced stone

In the wet gap of the year,

I faltered near his power ----

Who broke the water, the hymen

With his great antlers ----

There reigned upon each ghost tine

The mothering earth, the stones

Taken by each wave,

The fleshy aftergrass, the bones

Subsoil in each grave.

For more Things To Do and See in Fermanagh please click here.