New for 2023 Guided Tour of Scotland

Irish history spans some 6000 years of occupation dating back to Megalithic times, when the Celts arrived here from mainland Europe. Impressive burial mounds such as Newgrange, ringforts and dolmens like those at Poulnabrone and Craggaunowen in County Clare are attributed to those tribes of hunter gatherers.  The Celts were then followed by successive waves of invaders including the Vikings, Normans, English and even the Spanish, the French never quite made it even though a line of Martello towers were built to defend Ireland from just such an invasion. We finally achieved independence from England in 1916 for 26 of Ireland's counties while 6 in (Northern Ireland) still remain part of Britain. The commercial foundations of Dublin were laid by the Vikings (Dublinia) followed by the Normans who built impressive strongholds such as Trim castle where the epic movie 'Braveheart' was filmed. Please excuse the 2,000 bare-bottomed extras recruited from the Curragh Army Camp in County Kildare for that same movie..... 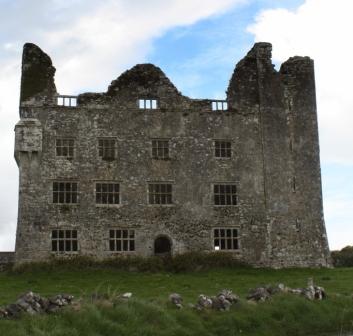 Other castles in Irish history range from large fortified towers with impressive keeps such as Bunratty Castle in County Clare, to smaller ones like Thoor Ballylee, in County Galway, former home of the poet and playwright Willaim Butler Yeats. Grand country houses like Tullynally and Birr were castle-ated with fairy tale parapets and towers during the reiqn of Queen Victoria. Many of these big houses and castles on vast estates were given to (often) absentee English landlords in return for military duty. As a result, many of these were ransacked and burned down during the 'troubles'. Others were saved and restored privately or are now under the management of Office of Public Works or the auspices of the Irish Georgian society and so have survived to tell the tale. There are hundreds of castles all over the country, many in ruins that you can explore for yourself, just be careful !

You can stay in quiet a few posh castles like well known Ashford or Dromoland Castles? Ballynahinch is much more atmospheric (it was once owned by an Indian maharajah) the 5 star Solis Lough Eske in Donegal or the delightful family run since 1940 Ballinalacken Castle in County Clare. Or you can go to a medieval banquet, throughout the summer in Dunguaire, Knappogue or Bunratty Castles. You can even rent a whole castle to yourself if you like, for a small kings ransom ?