Ireland can trace its sacred sites way back beyond the Pharaohs of Egypt and the Pyramids with built evidence in form of burial mounds like the one here at Newgrange. Which is aligned to the Winter Solstice on the 21st of December when the first rays of the rising sun track the spiral patterns and symbols on the stones to illuminate the burial chamber at the back of the tomb. This perfect alignment constructed by our Celtic astronomers some 5000 years agp is still working and draws visitors from all over the world to witness the event each year. No one knows for sure the purpose of Newgrange, whether it was a solar observatory or a burial site or both, but it is only one of 1000s throughout Ireland. Whatever their purpose, oral legends about Druids and Celtic Gods and Goddesses  were absorbed by Christianity with many of the finest churches, abbeys and monastic sites in Ireland having pagan origins. 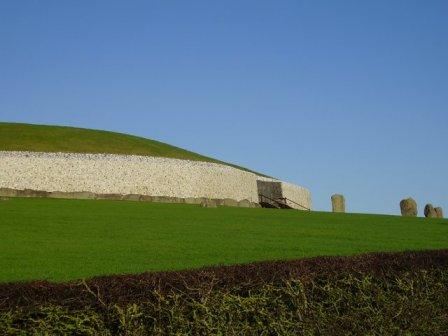 When St Patrick brought Christianity to Ireland in the 5th century, Ireland entered a Golden Age of Enlightenment and became known as the Land of Saints and Scholars. Impressive churches with high crosses were built at early monastic settlements like Clonmacnoise where the monks began to record the scriptures in beautifully illuminated manuscripts such as the Book of Kells, and intricately crafted metalwork items, inlaid with precious stones like the Ardagh Chalice and the Cross of Cong.

We visit many of the places below, including Tara, Newgrange (Brú na Bóinne, Monasterboice, Grianan an Aileach, Corcomroe Abbey and Uragh Stone Circle on my Guided Tours of Irelands Hidden Gems.

The 10 Best Sacred Places in Ireland are...

8  The Hill of Tara, County Meath