The Derry Peace Bridge over the River Foyle bridges a 400 year old physical and political gap between two sides of a once, bitterly divided community. Designed by Wilkinson Eyre Architects in London and funded to the tune of £14 million by the European Regional Development Fund for Peace it is a very impressive and elegant piece of architecture. With two structural arms heading in opposite directions, symbolizing the unification of both communities from the opposite sides of the Foyle river, the Protestant Waterside and the Nationalist Bogside, these two opposed and independent arms are now united in a symbolic handshake across the river. Opened in 2011 this 235 metre long, 4 metre wide curved footpath, track and cycleway stretches from the Guild Hall in the city centre of Derry City to Ebrington Square and St Columb’s Park on the far side of the River Foyle. 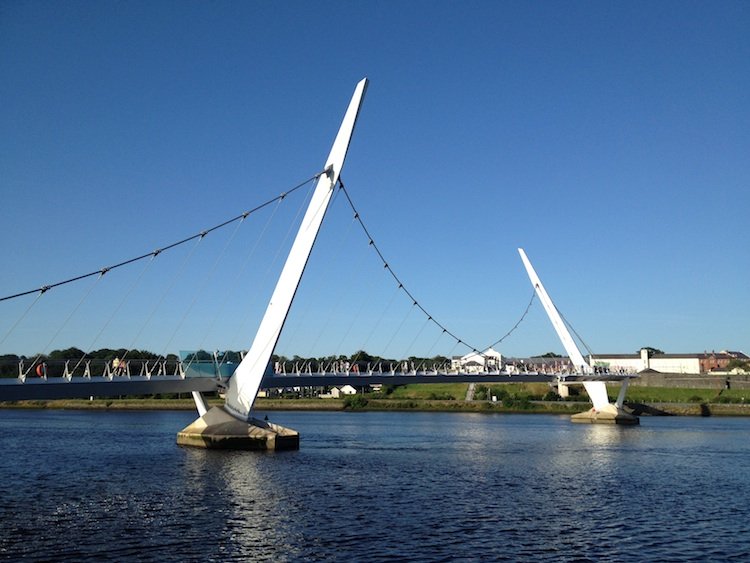 The Peace Bridge in Derry City

The Derry Peace Bridge has become an integral part of Derry City’s infrastructure and has changed the way local people use and view their city with over 3 million people having crossed it so far and many of the locals using it daily. Popular 24/7 it is never empty and while it certainly tells the local story of triumph over adversity it is nonetheless a universal symbol of peace that locals and visitors alike can relate to and resonate with, this bridge has become a kind of modern day place of pilgrimage. There is something very special indeed about it that sends shivers down your spine and is difficult to explain. It is one of those places you just have to go and see for yourself. There are even seats along it where people watch the river go by or stop and chat or even play music. As local man Michael Bradley, lead bassist of the Undertones says “People say Hello to you in Derry” and they do....aye, surely.

other Things to do and see in Derry

1 Check out Ebrington Square at the other side of the Derry Peace Bridge a former Army Barracks that has been transformed into a stunning public space for various open air events, art exhibitions and music spectacles.

7 Follow Michael Palin's advice and take one of the most scenic train rides in the world from the train station which is just a short walk from Ebrington Square.

8 Take a walk in the St Columb's Park a natural area of pasture land bordering the River Foyle beside Ebrington Square.

9 Or explore the old town outside of the city which has several nice restaurants including the Sooty Olive named for a fishing fly nothing to do with olives.

10 Return to the city via the Old Victorian Bridge a little further along the River Foyle.