Gougane Barra is probably the most romantic setting for a proposal or wedding anywhere in Ireland. Never has there been a prettier location for a church (Glendalough included) than St Finbarr, patron saint of Cork’s Oratory here on the lake. A deep U shaped valley carved out of the mountains of West Cork at the end of the last ice age, Gougane Beara is also where the Lee River rises. Up until the 1930’s this area was covered with smallholdings, with farmers and shepherds following the pilgrim paths for 100s of years, down to the small church on the lake to get mass, do the stations or take a dip in the healing stream. Having relocated the farmers, Coilte (Department of Forestry) began developing Gougane Barra as a commercial forest,  planting lodgepole pine, japanese larch and sitka spruce the only species that would survive on the poor soil. 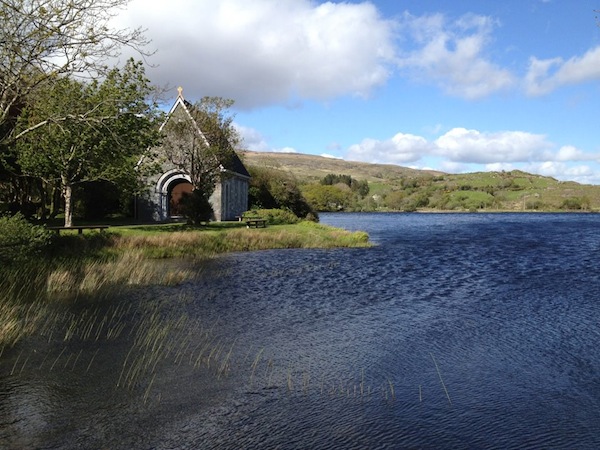 Gougane Barra Park has now matured nicely and developed more of a recreational than commercial bias and is the only National Park in Ireland that you can actually drive into and around for a small charge.  Although it is a lot healthier and more environmentally sound obviously, to leave your car and walk. There are 5 kms of roads and 10 kms of hiking / biking trails. Or do what walkers and hikers have been doing for years and stay at Cronin’s Hotel, a cosy 26 bedroom inn beside the lake that also serves hearty sandwiches that you can take with you for a picnic or relax with over a pot of tea and / or a pint of Guiness after your walk. A gorgeous place to get married too, if you are ‘doing a line’ as they say here or even thinking along those lines....

1  If you are heading back towards Bantry the Stone Circle near the village of Kealkill is well worth the climb for the views out over Bantry Bay.

2  Otherwise head towards Macroom and view the Megalithic tombs at Kemmcooraboula at Ballingeary.

3 Gortaneadin Grotto, on the roadside is the site of the famous moving statues which were witnessed in 1985. Erected in memory of Mary McCarthy by her parents in the 1960’s she have a fervent belief in Mary, the Blessed Virgin.

4 The Gearagh or wooded river which is the only post glacial, alluvial drowned forest in Europe.

5 Pass under the arch into Macroom Castle (the boyhood home of William Penn the founder of Pennsylvania) to visit the Tourism information centre there and perhaps get directions to the following.

6  Béal na mBláth is where the course of Irish history was irrevocably altered in 1922 with the ambush and murder of Michael Collins, commander in chief of the Irish Army.

7  Bealick Mill where the waters of the Foherish river where harnessed in 1899 to provide street lighting for the town, it now houses a famine museum.

9  Stay in the boutique Castle Hotel in the Macroom awarded the best carvery restaurant in Munster in 2014, leisure centre, golf and fishing nearby.

10 Make and paint your own toy soldier at the Toy Soldier Factory in at Kilnamartyra about 15 mins from Macroom on the way to Killarney.