“If only the walls could talk” a visitor commented on a recent tour of the Old Midleton Distillery in County Cork, where Jameson’s Irish Whiskey had been distilled for 150 years, before production moved to a more modern plant on the same site in 1975. Thankfully, someone had the foresight to retain and restore the original stone buildings, including the Grain Store which now houses the visitor centre, tasting bar, shop, restaurant as well as a small theatre, where visitors are introduced to the concept of Irish whiskey and how it is made, with a short film at the start of each tour. Following that and the highlight for me personally was the guided walk through the old site, starting in the yard where vintage black and white photos show farmers arriving with their sacks of barley, an essential ingredient in the making of Irish whiskey. 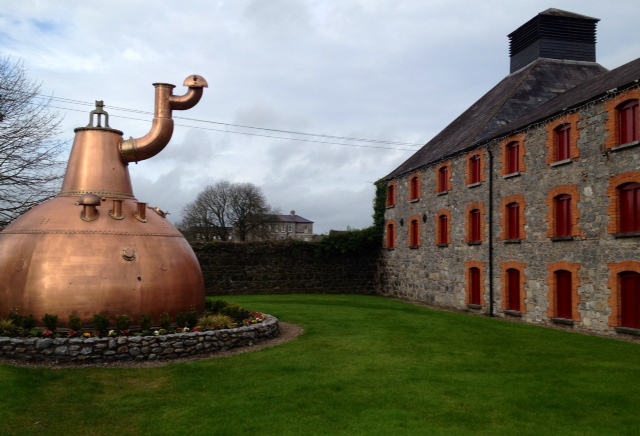 The barley first had to be dried on hot clay tiles in the malting houses, can you imagine the delicious smell that would have wafted out on the air back then, before being fermented into a mash in huge 50,000 gallon wooden vats, which are still there to be seen today. Another surprise, is the very pretty Master Distiller’s Cottage, where the current Irish whiskey master blender, Barry Crockett was actually born, he doesn't live there now and as it is used for corporate events and offices. Just opposite, still churning away is the Victorian, cast-iron waterwheel, installed in 1825 to power the mill machinery which still drives the cogs and wheels, much to the amusement of young visitors unused to the delights of raw machinery. 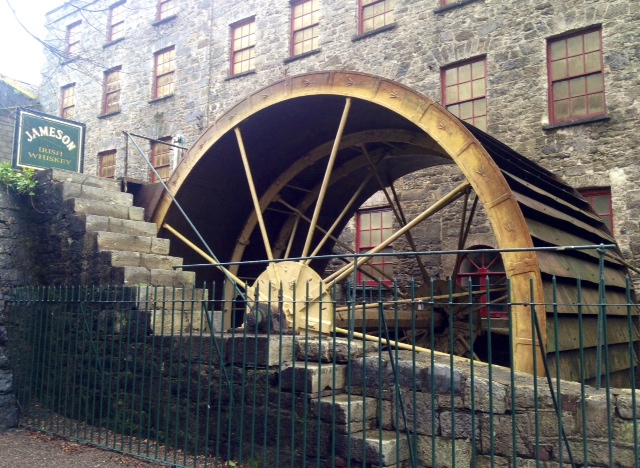 Or, actual weights and measures as seen outside the customs house and offices before entering the Still Room with it three shiny copper pot stills, one of which is still the largest in the world, with a 31,000 gallons capacity. Outside the brick chimney still bears its date of erection in 1125 in stone over the lintel. Inside the Cooperage, there is a demonstration of how the whiskey was actually aged in oak casks that were imported from Spain having been pre-used for perhaps Sherry which gave the whiskey its distinctive colour. Visitors will notice too as the whiskey ages it turns a deeper colour and intensity and even evaporates quite substantially which is known as the ‘angels portion’.

The tour winds up in the tasting bar where visitors are invited to compare Jamesons with a Scottish whiskey and a Canadian Bourbon and pick their favourite. No prizes for guessing which whiskey won out, seeing that Jamesons is now the largest selling Irish whiskey in the world. It is nice to know too, that, each and everyone of the million plus bottles, sold weekly is produced right here in Midleton in County Cork. So, if you happen to be in the area, I would highly recommend that you take this tour of the Old Midleton Distillery and so would the walls!