The Titanic Belfast opened with great aplomb in 2012 on the 100th anniversary of the ill-fated maiden voyage, that the whole world is familiar with. The building truly is icon in every sense of the word and very, very impressive. Located in the newly named Titanic Quarter, next door to the Harland & Wolff shipyards where the infamous ship was actually built and launched, it is designed to look like the hull from each direction. Six storeys high with a central atrium and tiered exhibition spaces it is worth a visit for the building alone with great, vertigo inducing, views out over the Lagan River and Belfast City. But the exhibition itself is absolutely brilliant (I cannot recommend it highly enough) and tells the story from start to tragic finish. I am not going to spoil it for you but I particularly liked the deck space where you could stand in various places and it showed the layout of the actual ship and the ocean floor theatre which simulates the seabed where the wreck was found by Dr Robert Ballard and his oceanographic team in 1985. 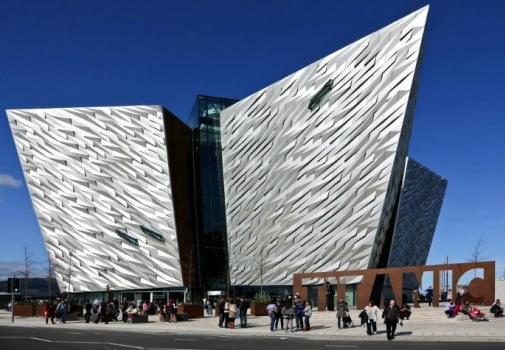 I visited the Titanic Belfast, when it was newly opened and had to queue for the ride-on ship yard tour which in hindsight I wouldn’t bother with again, but if there is no queue, by all means do it. Another good tip, do book your tickets in advance online as numbers are limited per hour for health and safety reasons and are often sold out early in the day. Similarly, in future I would book Afternoon Tea by the Grand Staircase, why not relive a bit of the grandeur? Instead of queueing in the busy restaurant on the ground floor. The whole of the Titanic Quarter will keep you busy for the day, you can do a walking tour of area including the Pump House as well as walking out to the edge of the dock where she was launched. On my bucket list for 2014 is a tour of the SS Nomadic, a sister ship of the Titanic that has been restored by the White Star Line and now is open to the public at the Hamilton Dock.

For more information on the Titanic Belfast please click here.

For more Things To Do and See in Belfast please click here.