Christmas in Ireland goes on for almost a month, starting on the 8th of December, a holy day (the Feast of the Immaculate Conception) and finishing on the 6th of January, another holy day (the Feast of the Epiphany) or Little Christmas as it is known in the West of Ireland. Christmas is all about tradition no matter where you grew up in the world and Ireland is no different. For me the best part of Christmas is meeting up with old friends and new, often by chance on Shop Street, in Galway and going for a hot drink and a catch up in front of the fire in Tigh Neachtain's just a stone's throw from St Nicholas Church, sound's good doesn't it? 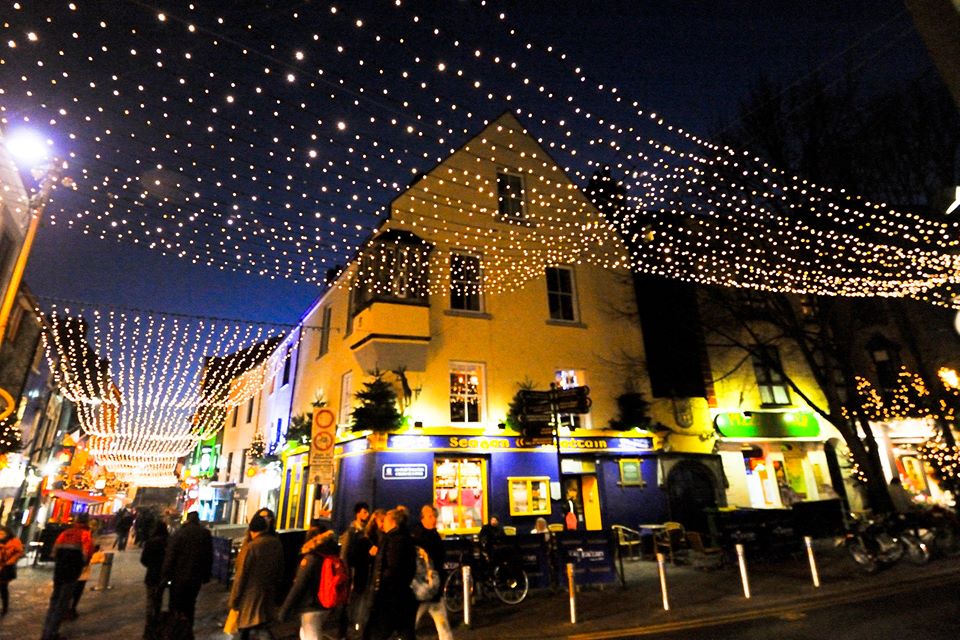 But we know it's not all bonhomie for a lot of people especially for anyone who is alone at Christmas, the pressure to play Happy Families can be the straw that breaks the camel's back. And a wise soul once said that "traditions are made to be broken" or make a few new ones, you will get plenty of ideas below which lists the Top 10 Traditions in Ireland and less we get to twee, I have included the then and now versions....... 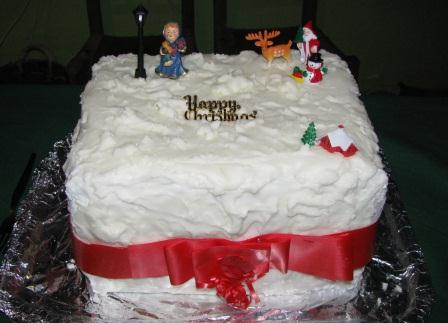 1 Christmas Cakes and Puddings (then) people complain that Christmas starts too early these days, Halloween is barely over and the shops have their decorations up. But in actual fact Irish Mammys would have had the Christmas Cakes and Puddings, a rich fruit and nut combination laced with whiskey, well made by October at the latest, in order for them to have matured enough by the big day. (now) We are more likely to buy smaller (perhaps even gluten free versions) from artisan food shops, bakeries and farmers' markets, well I do at any rate and can heartily recommend O'Connor's Bakery in Gort, County Galway.

2 The 8th December the feast of the Immaculate Conception, is a holy day (then) when traditionally families came 'up from the country' to do their Christmas shopping in one of the larger towns like Dublin, Cork or Galway. (now) apart from the facility to shop online 24/7 it is pretty much open season in many of the large shopping centres like Dundrum and the Kildare Village Outlet from November onwards. Although, there is still something magical about strolling down Henry Street or Grafton St in Dublin, Shop Street in Galway or Patrick Street in Cork at Christmas time.

3 A Visit to Santa, most likely you would have composed your list and letter to Santa long before now, but this was the day you showed your face and were on your best behaviour. (then) We always went to see Santa in Switzers (now Brown Thomas') on Grafton Street, who cleverly had a sack of blue presents for boys and pink for the girls. Switzers had the best Christmas windows and we would have spent hours (if we were let) with our noses pressed up against them. I am happy to say that Brown Thomas has continued that tradition and all of their windows nationwide are a sight to behold at Christmas. (now) we have ‘Santa Experiences’ everywhere from trips to Lapland to Bunratty, Belvedere House, Glendeer Pet Farm, Ailwee Caves that are booked up months in advance. 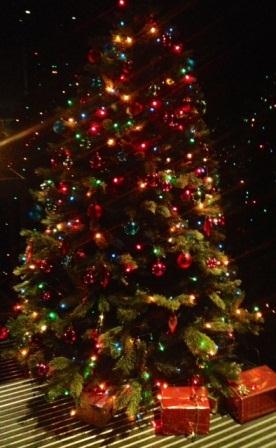 Rocking around the Christmas tree...

4 The Christmas tree didn’t go up until almost Christmas Eve back in the days and it would have been an ordinary spruce, from the Dublin mountains, no fancy imported breeds back (then) in County Clare, where I now live, a holly bush was the handier and preferred tree of choice. My Aunts in Whitehall only ever had a small artificial Christmas tree which we thought was very exotic altogether, though undoubtedly a fire hazard, it is a wonder it didn’t go up in smoke as the lights were connected to the light socket in the ceiling. (now) we have a wide variety of imported (non-shed trees) as well as any amount of pseudo cyber trees like the one in O’Connell St which was ditched last year in favour of a REAL tree.

5 Candle in the window (then) this was lit on Christmas Eve to signal to Mary & Joseph that they were welcome in every house unlike their experience in Bethlehem. As well as any stranger in need of warmth and sustenance. (now) We have a permanent candle in the window of Áras an Úachtaráin thanks to President Mary Robinson who famously re-adopted this custom during her term of office, to remember all of the emigrants that had left Ireland and let them know the candle in the window would always be lighting to remember them and show them their way home.

6 Midnight Mass we didn't go as children because we were tucked up in bed in case Santa caught us out and about, but the adults did (then) often after a good night in the pub and then there would be more merriment and sampling of the ham, mince pies and whiskey no doubt (now) Midnight Mass is as early as 7pm to facilitate families with young children (and no doubt to curb the pub exodus) and a lot of older people especially watch it on television which is hosted every Christmas Eve by RTE. 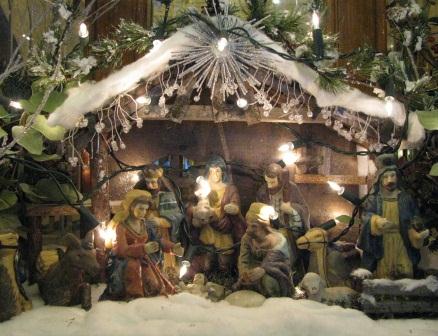 7 Christmas dinner was back (then) very much a family affair and woe betide you if you did not make it home for dinner on Christmas Day, which was served about lunchtime and consisted of roast turkey, stuffing ham, gravy and vegetables including the dreaded brussel sprouts, that were only ever available at Christmas back in days (no loss many would still say). Christmas pudding or Sherry trifle, a layer of spongey jelly with custard and cream and a generous sprinkling of 100s and 1000s was served for desert. After which there wouldn't be a peep out of anybody for the afternoon, while Chitty, Chitty, Bang, Bang or the Sound of Music droned away to itself on the television. (now) while stereo-typically it's still very much a family affair, many extended families have opened their doors and arms to embrace new traditions and cultural differences. Gone are the days of gnawing at a huge turkey carcass for a week. Many buy oven-ready or go out to eat in style on the day.

8 The Panto (then) the pantomine in the Gaeity or Olympia Theatre was the next big outing for us on St Stephen's Day (boxing day) or sometime after. Our Aunts very kindly took us each year and we loved sitting in the grand circle and roaring ‘behind you’ at Maureen Potter et al. Afterwards, we always visited the Moving Crib on Parnell Square, which is still there 50 odd years later. (now) Kids are more likely to go to Funderland in the RDS or ice-skating, while the adults go horse-racing or do something charitable like a 25 km run or fun swim (sometimes both) or head off up the mountains for a hike.

9 New Years Eve (then) was never a big deal in Ireland, it used to be the night of the 'dress dance' with plenty of Rí Rá and Ruaille Buaille (good fun) but mostly people watched Gaybo on RTE 1 (Irish television) which kicked off 50 odd years ago from Christchurch Cathedral in Dublin. (now) New Year’s Eve is getting to be a bigger event every year in Dublin with fireworks and a free open air concert on College Green, weather permitting of course! Down the country we are much more likely to be at home or at impromptu parties in our neighbours' houses, due to the price of drink out and (quite rightly) very strict drink-driving laws.

10 6th January the feast of the Epiphany, was the day (then) when Christmas officially ended and the decorations were taken down and put away for another year. In the West of Ireland it was called Little Christmas or Nollaig na mBan (women’s Christmas) when the men got to do all the work and prepare a meal for the ladies of the house. (now) in the West at least, the sisterhood has embraced this old tradition, wholeheartedly, over the last few years with many specially organised (ladies only) dinners and events, nice one! 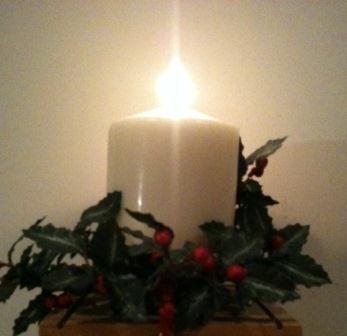 That's about the size of Christmas in Ireland, but wherever you are, whoever you are with and whatever you get up to this Christmas 'Ta suil agam do mbanfidh sibh taitheamh ás agus Nollaig Shona Dhaoibh go leir' - I hope you enjoy it and Happy Christmas to you all.... Susan Byron