Coole Park is where Lady Augusta Gregory, a co-founder of the Abbey Theatre as well as a writer, playwright and patron of the arts lived in Galway. She was born Augusta Peresse in nearby Roxboro, and married her husband William, 35 years her senior in 1880. He had made his fortune in India and she became the mistress of his large house (now demolished) and country estate in County Galway. They had one son Robert who died in action in WW1 in ‘the skies over Italy’ leaving a wife, son and two young daughters. These adored grand children were practically reared at Coole Park. A charming book ‘Me and Nú’ tells the story of their enchanted childhood here and of the many famous people that they met, who came to stay there. Including the playwright, George Bernard Shaw, whose trickery in the orchard is carved out in stone on the plaques by the deer park, beside the visitor centre. Unlike many absentee landlords at the time, Lady Gregory seems to have been well liked and very kind to her tenants and workers.... 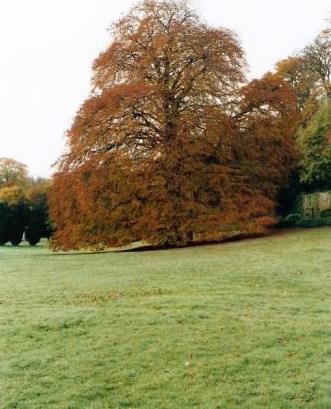 Lady Gregory was very involved with the revival of Irish Culture and Nationalism and was constantly having literary and artistic visitors to stay. They carved their names on a huge beech tree in the walled garden, which became known as the Autograph tree. The tree and the initials are still there to be seen although with a protective fence to ward off further less worthy signatures! Unfortunately, the house was torn down during the ‘troubles’ and the magnificent library of original Irish literature was lost forever which would no doubt have been a great cultural attraction these days. However, the estate and walled garden remain, along with guided paths through Yeats ‘Seven Woods of Coole’ and the famous lake where the  'bell beat of the (wild swans) wings’ can still be heard overhead... 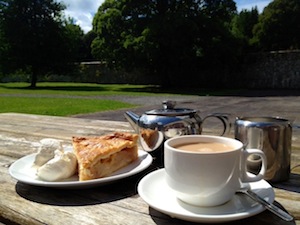 Tea and apple pie in the garden at Coole Park, County Galway

There is a free exhibition in the old coach house, a nice restaurant (very good vegetable soup and garlic bread and excellent homemade apple pie) and a picnic area with lots of free events and nature walks with the park ranger for families, throughout the year. See the website below for up-to-date listings.

There is a newly opened trail linking up Coole Park to the woods at Garryland which has some of the oldest oak woods in Ireland, although the trails can get flooded during the Winter.

1 Kiltartan National School another small museum about Lady Gregory, just down the road on the lefthand side before the junction of the main Galway to Ennis road.

2 Thoor Ballylee former home of William Butler Yeats, a solid fortified tower house, in a pretty setting beside a bridge, spanning the river Cloon (currently closed) but still wonderfully atmospheric and well worth going to see ...

3 Gort is a market town which once boasted in excess of 40 pubs, if you want to see an old fashioned shop with a bar at the back, go into Burkes in the middle of the town, on the left hand side, just before the overhead railway bridge.

4 The Gallery Café is a quirky cafe/restaurant on the square is an eclectic interior that's great fun, good wholesome food, I often go there for a healthy lunch or delicious coffee and scones.

5 The Lady Gregory Hotel further up the town, does a very good carvery lunch and evening meals. If you opt to stay there it is a very good base for touring the Burren and Galway, you can enjoy the facilities of the Swan leisure centre.

6 Lough Cultra is a very scenic drive south east of the town, well signposted through an area called Kilaneena and Lough Graney. Known locally as ‘little Killarney’ it is just as picturesque as the real thing.

7 Kilmacduagh monastic settlement just outside Gort, includes a round tower (the tallest in Ireland) several churches, a cathedral and a glebe house, collect the keys at the bungalow opposite.

9 Dunguaire Castle open during the day, medieval banquets are held throughout the summer.

10 The Gentian Café is a nice little café on the harbour which does great coffee, full Irish breakfast, light lunches and dinner during the summer.