Mount Stewart is a fantastical garden in every sense of the invented word. Created by Lady Londonderry who considered it to be ‘the coldest, darkest, dampest’ place in the world, she set about transforming the land around the house in a whimsical and most colourful way. No expense was spared in turning this extensive parcel of land on the Ard’s Peninsula sandwiched between Strangford Lough on one side and the Irish Sea on the other into the most talked about garden in the empire at the time. Lady Edith, a society hostess, created a series of formal gardens including the sunken garden surrounded by a rose covered pergola, designed by Gertrude Jeykll, to be a riot of orange, purple and blue, in which she could entertain lavishly. Thanks to meticulous records the same planting schemes have been retained to this day. The Dodo Terrace on the west side of the house, surrounded by carved stone monkey columns was inspired by Aesops’ Fables and here and there you will see all manner of strange stone creatures, crocodiles, cheetahs, warthogs. 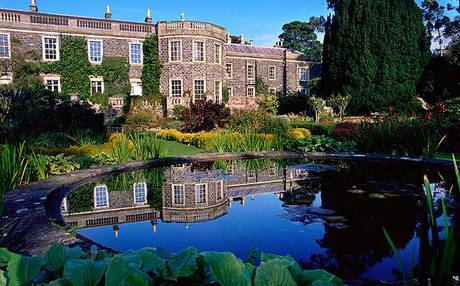 They each represented the members of Lady Edith’s exclusive social circle the Ark Club, were members were named after a mythical creatures eg Sir Winston Churchill was known as Winston the Warlock. One can only imagine the parties and goings-on, apparently her favourite saying was ‘what lovely fun!’ You will find the stone ark on the left hand side as you walk through a small glade to Mairi’s garden. Named after Lady Edith’s youngest daughter, who used to sit in her pram there, it has a cockle shell fountain in the centre surrounded by Canterbury Bells in blue and white inspired by the nursery rhyme “Mary, Mary, quite contrary, how does your garden grow....”  It is delightful as are the rest of the gardens, the lake walks, the Temple of the Winds, Tir na nÓg (land of the young) the family burial ground. With the family long gone, their legacy, Lady Edith donated the gardens to the state in 1954 and her daughter Lady Mairi the house in 1977. with the result that Mount Stewart on the Ard's Peninsula in County Down, is a wonderful house and garden, unlike any other in Ireland, that we can all enjoy today.

1  Take a guided tour of the house if you have not done so already.

2  Or an extended walk in the grounds to see the Temple of Winds and or the Tir na nÓg as mentioned already.

3  Scramble up Scrabo Tower on the far side of Strangford Lough for the views, you can see Scotland on a good day.

4 Visit Castle Espie, the Wetlands, Wildlife Reserve where you can get up close and personal with nature or if you can’t make you can watch the critters on webcam!

5  Visit Rowallane another beautiful (if smaller) garden designed by Reverend John Moore and his nephew Hugh Armytage, it now owned and managed by the National Trust.

6  Visit the Somme Centre which commemorates obviously the Battle of the Somme and its connection with Ulster and the men who fought and lost their lives there, less we forget.

7  Crawfordsburn Country Park just outside Bangor, on the shores of Belfast Lough overlooking St Helen’s Bay let yourself and / or the kids loose in this huge country Park

8  Bangor Castle Walled Garden has been completely restored and opened to the public, free admission.

9  Ulster Folk and Transport Museum Hollywood, is quite an old attraction set up almost 40 years ago to demonstrate how life was in Ulster in the old days. It also has the largest transport museum in Ireland with particular emphasis on the railways. An all day visitor attraction.

10 Stormont Castle, Belfast is where the governing body of Northern Ireland, the Northern Ireland Executive hold their meetings and debates and important events like the Peace Agreement are signed and sealed. You will recognize it instantly from media coverage, free guided tours are available daily throughout the summer.