Knockranny House Hotel is my preferred accommodation in Westport as it is slightly outside of town in a raised position overlooking Croagh Patrick and scenic Clew Bay with its 365 islands. Westport deservedly won the title of Best Place to Live in an Irish Times Competition in 2012 and is buzzing with activity all year round. But since then and indeed long before that, it has kind of become a victim of its own success, drawing visitors from near and far with the result that quality accommodation is hard to find. Knockranny House Hotel is short drive or pleasant 5 minute walk away, which means it doesn’t get or allow the copious hen and stag parties that frequent the centre of town. Not that I am a kill joy, "let them off" as they say but I want a comfortable nights sleep and not to be woken up as the revelers return at 4am in the morning! I also want great food and surprise, surprise some serious cocktails.... 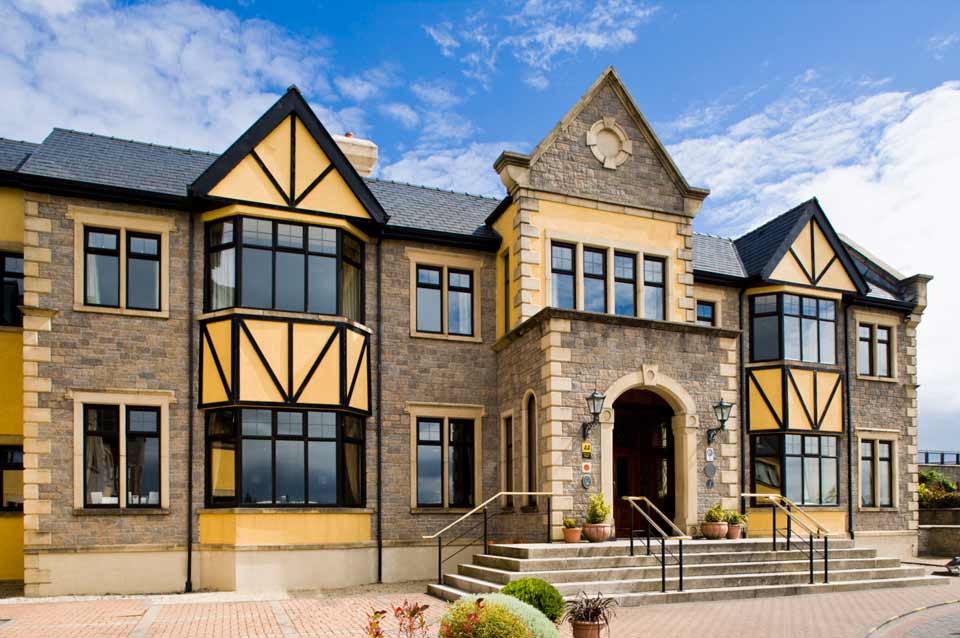 But first things first, the room we were allocated, and Knockranny House Hotel has some great deals for one or two nights bed and breakfast including dinner one night, was the size of a small bedroom with a bed big enough to sleep a small family! Zillions of thread count sheets and pillowcases ensure blissful sleep and the kind of luxury I dream of having every day, if only I had a maid and an in house laundry! But this is what makes these kind of escapes special, that and an adult only spa styled like Roman Baths with candle light and Grecian pottery urns. In fairness, it is a little tired but full marks for having a clock, I find it more relaxing somehow to know the time and a machine to dry your swimsuit, who wants a soggy wet in your bathroom especially when you will most likely want to return for a treatment the following day. I indulged myself with a Sole Massage which was beyond delicious and long lasting, I am still feeling the positive effects.... 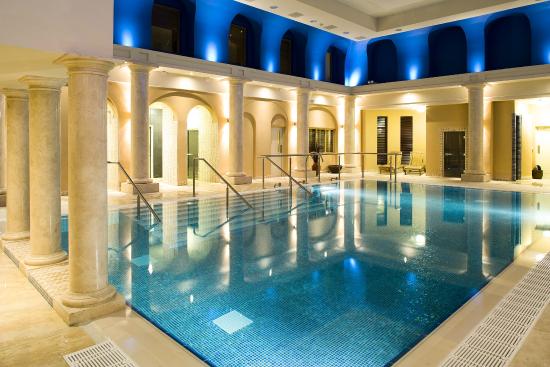 Ditto the luxury of a couple of nights away in Ireland in a lovely place like Westport where there is so much to see and do, see below, including pottering around the town itself with its many cafés, we loved having tea, in a china pot, and fresh rhubarb (from the owners garden) pie and cream at Willow, beside the town clock. But there are dozens more little cafés, craft shops, art galleries and book shops to browse in which unfortunately one seldom gets to do in real like back home, certainly not as a couple which make a break away even more romantic. Similarly getting dressed up and having a cocktail before dinner, Owen Hughes head barman in Knockranny House Hotel has won numerous awards for his concoctions, of which I had several despite my favourite being named “Just the one, so”. 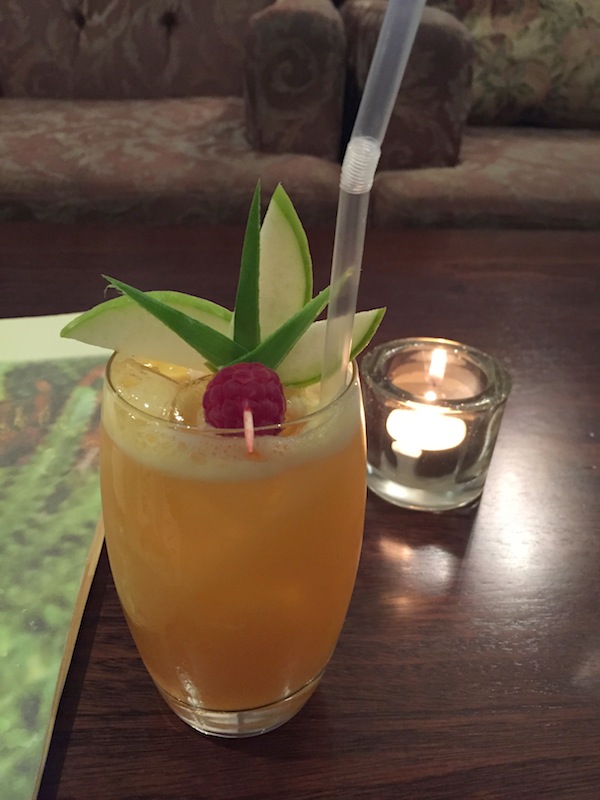 Dinner in the La Fougère Restaurant was magnificent with signature dishes of the hotel's own smoked salmon and foie gras for starters with rosé veal and fillets of John Dory for mains one night followed by a perfectly cooked steak and turbot the next night. We had toyed with going down town to sample one of the many restaurants there but we were just too comfortable and relaxed to bother. Besides, isn't it the little things that count always? A constant bug bear of mine, traveling all over Ireland, is how seldom I come across really good vegetables considering we grow the best of produce here, but Knockranny House came up trumps with a light as a feather whipped potato (with a hint of mint) rissole, single charred buttered carrots and fresh broccoli tips which were delicious. With a good reasonably priced bottle of wine on both nights we enjoyed watching the sun set behind Clare Island and looked forward to our return visit... 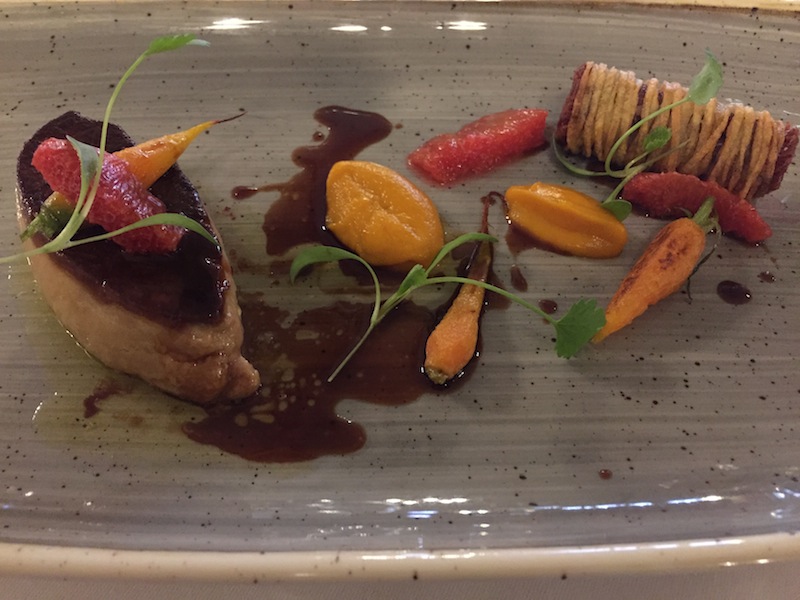 For more information or to book your stay online at Knockranny House Hotel please click here.

Top 10 Things to Do and See in Westport.

1 Visit Westport House whose owners are direct descendents of the Pirate Queen Grace O’Malley, it is now in the capable hands of the five Browne sisters who famously inherited it from their father and now run it between them, it is open all year round.

2 Cycle the Great Western Greenway, the first of its kind in Ireland which utilises the old railway corridor from Westport to Achill as a traffic fee cycle and walkway, it has been a runaway success with visitor and locals alike.

3 Drive out to Achill Island, beloved of painters such as Paul Henry and writers like Heinrich Böll, it had the first Atlantic Drive and has several magnificent beaches including, Keel, Keem and Dugort which are considered some of the Best Beaches in Ireland.

4 Climb Croagh Patrick where St Patrick is believed to have fasted for 40 days and nights, if you are fit? or as far as the statue for some stunning views out over Clew Bay. It takes about 2-3 hours to get to the top or visit the interpretative centre at the bottom of the mountain.

5 Take a trip out to Clare island, where that same Pirate Queen Grace O’Malley who ruled the high seas about here in the 16th century had one of her many castles. Legend has it she kept a rope to her ships moored out in the bay, passed through a hole in the wall and tied to her bedpost at night. She is buried in a 12th century abbey with the oldest frescoes in Ireland on the island.

6 Ballycroy National Park is soon to become the last dedicated wilderness in Europe when all evidence of human interference has been removed. Fabulous interpretative centre with short and long with board walks out over the bog and 360 degree views of the Nephin mountain range and Achill Island.

7 The Museum of Country Life in Castlebar is one of the four Museums of Ireland. This one is housed in a cool modern building overlooking the lakeside setting of Turlough House and gardens. It depicts  how life used to be in rural Ireland not so very long ago and runs free workshops and craft events regularly.

8 Foxford Woollen Mills was developed by an ambitious nun Mother Mary Agnes Murrogh Bernard to provide employment and an income for the poor people of Foxford in the 1890s. Long before duvets were invented most beds in Ireland were warmly dressed with well remembered cosy Foxford blankets in plain cream with candy stripes of blue or pink.

9 The Ceide Fields above in Ballycastle where only discovered relatively lately, considering that they predate Machu Pichiu by a couple of thousand years, by a local man out cutting turf on the bog. His archaeologist son was to the fore in excavating the site and developing the interpretative centre which tells the story of the oldest field system in the world.

10 Downpatrick Head, again named after our patron saint, features a dramatic sea stack (200' high) Dún Briste which means 'broken fort' was parted from the mainland by high seas in 1393. There is also a dangerous blow hole where 25 locals perished during the 1768 rebellion. An open air mass is held there on Garland Sunday which is the last sunday in July.

For more information re all of the above visit Destination Westport.ie