Although Ballycroy National Park has been opened a couple of years now, very few people seem to know of its existence other than the locals. A vast park covering some 11000 hectares of Atlantic Bog backed by the Nephin Beg mountain range it offers a true wilderness experience (shortly to be the only one of its kind in Europe) where people can lose themselves literally in the Wilds of County Mayo. Obviously, not for amateurs or day trippers who can browse the state of the art visitor centre instead or gaze at the endless 360 degree  views out over the bog and heather as far as Slievemore on Achill Island away off in the distance.... 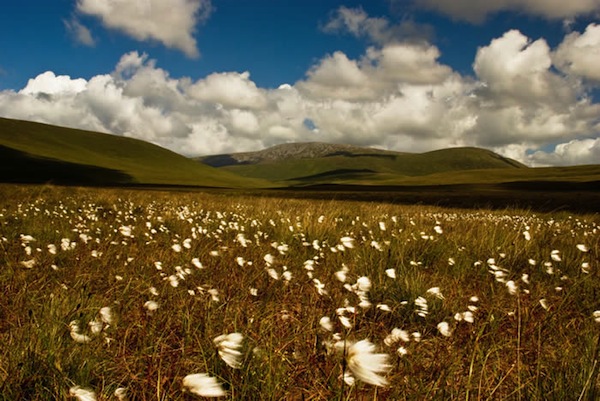 Or take the relatively short (10-15 minutes) circular board walk adjacent to the visitor centre, which is one of the best I have come across in a long time with good, interesting and well put together exhibits. Apart from the geological and biodiversity aspects, what I particularly liked were the video recorded conversations with locals discussing all aspects of life locally, from knitting to whaling, which was of enormous economic importance once upon a time. Nowadays it is a different kind of 'oil' with the controversial Shell pipeline that is keeping locals in the North of the County around Bellmullet well employed and well paid. Overshadowed somewhat by the huge emphasis and promotion of the Great Western Greenway, a traffic free cycling and walking corridor from Westport to Mulranny, which in fairness is excellent, Ballycroy is definitely a quiet hidden gem that is well worth seeking out.

1 Blacksod Bay and peninsula where there is an ongoing fight between Shell and locals re running a gas pipeline through the area.

2 Ballina, famous salmon fishing town a few very nice hotels, the cool Ice House and stately Mount Falcon but perhaps best of all Belleek Castle where the bar has been made from the wreck of Spanish Armada ships...

3 The Céide Fields is a 5000 year old field system that was uncovered recently having lain undisturbed but perfectly protected beneath blanket bog, very interesting with a pyramid shaped visitor centre with fantastic views from up top.

5 Easkey, is a surfer’s paradise but way too dangerous for amateurs in my book. Ireland’s leading professional female surfer Easkey (which means fish) Britton is named after this place where she learned to surf at the age of four.

6 Achill Island is a large island off Mayo connected by bridge, incredibly beautiful with the highest cliffs in Europe (3 times the height of the Cliffs of Moher) at Croghan but not nearly as accessible by any means.

7 Keem Bay, a perfect little horseshoe bay of white sand and turquoise water at the Western tip of the island on the lee side of those cliffs above.

8 Dugort, another beautiful beach in the shadow of Slievemore (translation big mountain) the Cottage Restaurant is perfect for lunch or a snack with delicious cakes while I am told Pure Magic, a kite surfing centre run by 3 French lads serves the best pizza for miles.

9 Achill Beg, you would have to get a boat to take you out to this tiny island. But, I can’t think of a better way to spend a sunny day, Robinson Crusoe style!

10 Yvonne's Cottage, Rossturk near Mullranny,  a restored 1850s cottage by a Dad in memory of his daughter. As well as being a tearooms there are regular demonstrations of butter churning and break making.